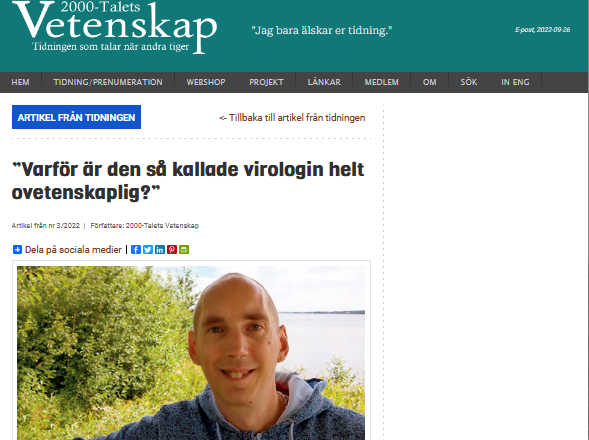 Because of my various interviews in Swedish alternative media in the past years about the problems in “virology” I had the privilege of getting contacted by the editor of a Swedish scientific journal called 3rd Millenium Science which is a totally independent journal not beholden to any politics, religion or commercial profit interests. Apparently the editor had listened to some of my interviews and found my information and myself very interesting where I was asked if I could write a 3 page article and give an overview of “virology” and its history and the various problems. Obviously I was shocked, amazed and deeply honored with a mix of feelings of great responsibility and excitement where I was asked to do this very important work because I was fully aware of the great opposition to this kind of information.

I have to admit that before I started to write the article I wasn’t sure if I was up to the task because I had never written anything longer than a few paragraphs before this about anything but thought I start at the beginning of the history of “virology” and see where it would take me and it didn’t take me more than a few hours to get my first draft done. After some help with making it look great I sent it in for publication and in late October of 2022 I had the article finally published with the title “Why is so-called virology completely unscientific?”. Because this information is of the greatest importance I thought that I should have it translated into various languages so I decided to reach out to various people across to world to have it translated which is finally done now which is why I am writing this article now.

My intention from the beginning when I was writing my article was to have it translated because I wanted this published article to inspire other editors around the world to welcome this kind of information and know that there are courageous editors out there. Science at its core is all about asking questions and reviewing previously established ideas which is the only way for science to advance but no new paradigms or advancement in science can ever be achieved by having our eyes and ears closed. This type of information has huge consequences on society and especially on health care where it’s a matter of life and death because currently people all around the world are being misdiagnosed and mistreated which in many cases leads to unnecessary harm and even death.

So without further ado, here is the full article in the various languages.

I want to give special thanks to all of the translators and people involved, you have my deepest gratitude.