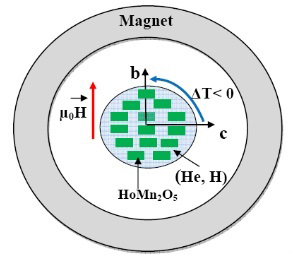 Magnetic cooling is a promising new refrigeration technology boasting several advantages – ranging from lower energy consumption to eliminating the use of hazardous fluids – that combine to make it a much more environmentally friendly option than today’s standard fluid-compression form of refrigeration.

One novel magnetic cooling approach, developed by a team of Canadian-Bulgarian researchers, relies on solid magnetic substances called magnetocaloric materials to act as the refrigerant in miniaturized magnetic refrigerators. As the team describes in the journal Applied Physics Letters,from AIP Publishing, these materials are the key to the development of a “green” cooling technology whose efficiency is able to scale directly with the generated magnetocaloric effect.

The magnetocaloric effect is “the thermal response of a magnetic material to the change of an external magnetic field, which manifests as a change in its temperature,” explained Mohamed Balli, a researcher in the physics department at the Université de Sherbrooke in Quebec, Canada.

Ferromagnetic materials, for example, are known to heat up when magnetized and to cool down when the magnetic field is removed.

“The presence of a magnetic field makes ferromagnetic materials become more ordered. This is accompanied by disorder within the atomic lattice, which causes an increase in the material’s temperature,” Balli said. “Inversely, the absence of a magnetic field means that the atomic lattice is more ordered and results in a temperature decrease. Magnetic refrigeration essentially works by recapturing produced cooling energy via a heat transfer fluid, such as water.”

The researchers originally set out to measure the standard magnetocaloric effect in the multiferroic compound HoMn2O5, because this material possesses an insulating behavior that prevents energy losses associated with electric currents passing through it when altering its magnetic field.

This discovery is an important step toward the development of magnetic cooling technology, and will likely lead to efficient, “green” cooling systems for both domestic and industrial applications. “Using the rotating magnetocaloric effect means that the energy absorbed by the cooling machine can be largely reduced,” Balli noted. “It also opens the door to building simplified, efficient, and compact magnetic cooling systems in the future.”

Next, the team plans to explore the possibility of improving the rotating magnetocaloric effect in HoMn2O5 crystals and related materials.