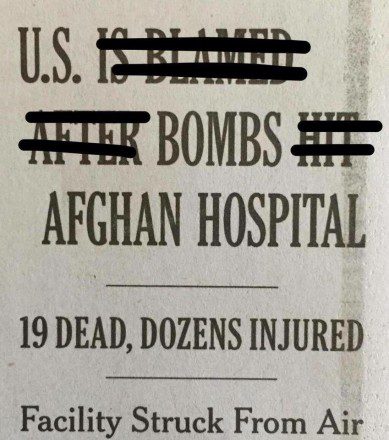 AFP, the first network to report the story, in the early hours of October 3, quoted NATO saying, “US forces conducted an air strike in Kunduz city…. The strike may have resulted in collateral damage to a nearby medical facility.”

MSF promptly issued a statement (10/3/15), revealing that it had been “hit several times during sustained bombing and was very badly damaged.” In an update hours later, MSF said it “condemns in the strongest possible terms the horrific bombing of its hospital in Kunduz, which was full of staff and patients.”

The humanitarian organization also indicated multiple times—and in bold capital letters—that “all parties to the conflict, including in Kabul and Washington, were clearly informed of the precise location (GPS Coordinates) of the MSF facilities in Kunduz, including the hospital, guesthouse, office and an outreach stabilization unit.” MSF says the US “repeatedly and precisely” hit the hospital.

The hospital was repeatedly & precisely hit during each aerial raid, while the rest of the compound was left mostly untouched #Kunduz

Morever, the aid group explained that the “bombing in Kunduz continued for more than 30 minutes after American and Afghan military officials in Kabul and Washington were first informed by MSF that its hospital was struck.” That is to say, the US persisted in bombing a hospital that it explicitly knew before and during the attack was a hospital.

If you read US corporate media coverage of this incident, however, US culpability would likely not be evident. Instead, readers would learn that a hospital was bombed in Afghanistan, and that people died. Who exactly carried out the bombing would not be clear.

“Air Attacks Kill at Least 19 at Afghanistan Hospital; US Investigating,” wrote CNN (9/3/15). Who carried out those attacks? Never asked is who else could possibly have bombed the hospital. What other air forces are attacking Kunduz? Did the bombs magically fall from the sky? CNN provides no answer.

“Aerial bombardments blew apart a Doctors Without Borders hospital in the battleground Afghan city of Kunduz about the time of a US airstrike” CNN said. The blowing apart of the hospital just appears to be a temporal coincidence.

Fox News‘ headline (10/3/15) reads “US Officials Investigate Airstrike in Afghanistan That Killed at Least 19 at Doctors Without Borders Hospital.”

The New York Times completely rewrote and changed the title of its report on the bombing seven times. Early on October 3, the Times published an article headlined “Airstrike Hits Hospital in Afghanistan, Killing at Least 9.” Minutes later, it changed the headline to “Airstrike Hits Doctors Without Borders Hospital in Afghanistan.” Two hours after, it became “Afghan Hospital Hit by Airstrike, Pentagon Says.” Then “US Investigates After Bombs Hit Afghan Hospital,” before finalizing as “US Is Blamed After Bombs Hit Afghan Hospital.”

The over 20 versions of the article published in the Times‘ website can be seen at the website NewsDiffs, which monitors edits to pieces published in large new outlets. Because the Times changed the web URL for the article when changing the headlines, there are three separate entries on NewsDiffs. Not one of the five New York Times headlines indicated that the US was responsible for the bombing. The final title, “US Is Blamed After Bombs Hit Afghan Hospital,” which was published in print, fails to acknowledge that it was the US who dropped those bombs, which explains why it is blamed.

The New York Times‘ other story (10/4/15), “Doctors Without Borders Says It Is Leaving Kunduz After Strike on Hospital,” was also substantially edited and rewritten numerous times. It’s likewise full of weasel words and quotes from the US government.

The Washington Post (10/4/15) also changed headlines and URLs for its reporting, making it difficult to track. It did choose a title acknowledging the US role in the attack, but attributed it to MSF, writing, “Doctors Without Borders Says US Airstrike Hit Hospital in Afghanistan; at Least 19 Dead.”

AP headlined an article (10/4/15) updating the death toll, “Doctors Without Borders Leaves Afghan City After Airstrike.” The piece says, “A deadly airstrike destroyed its hospital and killed 22 people, as the US and Afghan governments vowed to get to the bottom of the carnage.” Not mentioned is that the US government is responsible for the carnage.

Ambiguous, misleading and even downright dishonest language abounds throughout the coverage. US media spin the story to reflect positively on the culprit; they report that the US is investigating the atrocity, while failing to acknowledge that the US itself is responsible for the atrocity.

This technique is very reminiscent of the loaded language police departments use to downplay police brutality—language that is often repeated verbatim by journalists who just uncritically quote government press releases.

Not all media were as biased in the interest of the Pentagon, however. Even some US news outlets were clear and honest in their reporting. US: We Accidentally Bombed Hospital to Kill Taliban

After the attack, MSF released a statement saying “All indications currently point to the bombing being carried out by international Coalition forces”—that is to say, NATO.

As details became clearer, the media narrative began to shift from one of obfuscation or even denial of the US bombing to one of apologism and justification. When it was obvious that the US and NATO were responsible for killing and wounding scores of people at a hospital, the US and Afghan governments began to fall back on the “human shields” excuse.

A Washington Post article (10/4/15) first titled “Afghan Official: Hospital in Airstrike Was ‘a Taliban Base,’” and subsequently changed to “Afghan Response to Hospital Bombing Is Muted, Even Sympathetic,” quotes Afghan government officials who claimed the “hospital has a vast garden, and the Taliban were there.” Yet MSF’s aforementioned statement makes it clear that the US “repeatedly and precisely” bombed the hospital, not the surrounding areas, which were “left mostly untouched.”

The aid organization also explicitly denied fighters ever being anywhere inside the hospital compound.

In a statement titled “MSF Response to Spurious Claims That Kunduz Hospital Was ‘A Taliban Base,’” the aid organization wrote:

MSF is disgusted by the recent statements coming from some Afghanistan government authorities justifying the attack on its hospital in Kunduz. These statements imply that Afghan and US forces working together decided to raze to the ground a fully functioning hospital with more than 180 staff and patients inside because they claim that members of the Taliban were present.

This amounts to an admission of a war crime. This utterly contradicts the initial attempts of the US government to minimize the attack as “collateral damage.”

There can be no justification for this abhorrent attack on our hospital that resulted in the deaths of MSF staff as they worked and patients as they lay in their beds. MSF reiterates its demand for a full transparent and independent international investigation.

MSF also made it clear that its hospital “is the only facility of its kind in the whole northeastern region of Afghanistan,” and that its “doctors treat all people according to their medical needs and do not make distinctions based on a patient’s ethnicity, religious beliefs or political affiliation.”

Despite MSF’s explicit denial of the allegations, US media continued to reiterate the claims of US and Afghan government officials.

Anonymous US military officials told Fox News (10/3/15) they “regret the loss” of scores of innocent lives, but “say the incident could have been avoided if the Taliban had not used the hospital as a base, and the civilians there as human shields.”

But wait, which was it? Was the bombing an accidental incident of “collateral damage,” as the government claimed at first, and as the media reverberated? Or was it a deliberate attack on the Taliban, who were supposedly firing from the hospital? It can’t be both; the two explanations contradict each other.

The fact that, when MSF’s points—and not just those of the US and Afghan governments—are considered, the human shields argument does not withstand close scrutiny aside, a blatant contradiction emerges in this narrative. The answer to this critical question remains unknown; the government, and the media that so obediently echoes it, do not clarify. Striking, too, are the similarities to US reporting on Israeli airstrikes. In order to justify bombing hospitals in Gaza, the US-backed Israeli government often claims Palestinian militants use the medical facilities as bases. Israel’s military—which has itself used human shields many times—then says it is justified to bomb hospitals, UN shelters and other civilians areas.

US ally and NATO member Turkey borrowed Israel’s hasbara (public relations) tactic and claimed the same about leftist Kurdish militants in order to justify its killing of Kurdish civilians.

The Wall Street Journal (10/4/15) boldly steered clear of any posturing and openly justified the US bombing of the hospital. The unsigned editorial justified the mass killing of MSF aid workers by shifting the blame onto the Taliban insurgents. It even brought up the specter of Hamas, writing, “Like Hamas in Gaza and Hezbollah in Lebanon, the terrorists hide near civilians. These Taliban tactics put the medical personnel and patients at risk.” The piece waxes poetic, and hagiographic; in a moment of undiluted American exceptionalism on blast, the Journal claimed that “no force in the history of warfare has done more to avoid civilian casualties than the American military.”

Remove references to the US and the Taliban in such media coverage, replace it with blanks, and you have a template media can use any time a US ally bombs civilians—A Guide to Defending War Crimes Committed by US Allies: “[Ally] did not actually want to bomb [civilian area], but [enemy] forced it to.”

When US enemies like Russia carry out airstrikes, all nuance is thrown out the window; US media drop their standards and gleefully accuse the enemies of war crimes. Yet when the US and NATO carry out airstrikes, journalists suddenly have a newfound skepticism. Their language immediately becomes ambiguous, their writing unclear; murky passages written in the passive voice are ubiquitous.

Official international bodies have not minced words about the bombing, nevertheless. The UN says the US attack on the Kunduz hospital was “inexcusable and possibly even criminal” (Australia’s ABC, 10/4/15). UN High Commissioner for Human Rights Zeid Ra’ad Al Hussein remarked, “If established as deliberate in a court of law, an airstrike on a hospital may amount to a war crime.” The humanitarian organization is demanding an investigation “by an independent international body,” not by the US, noting that “relying only on an internal investigation by a party to the conflict would be wholly insufficient.”

Pulitzer Prize-winning journalist Glenn Greenwald (Intercept, 10/3/15) pointed out the hypocrisy of the US warning about civilian casualties of Russian airstrikes while it bombs scores of doctors and patients in Afghanistan, a country it has militarily occupied for close to 15 years.

When Russia denies killing civilians in its airstrikes on Syria, US media are suddenly skeptical and thorough; yet when the US government makes the same claims, journalists just recycle its press releases.

Is the job of the media to just uncritically report what favored governments say? Or is it supposed to examine the truth of official claims? If it is supposed to be the latter, US media have abysmally failed in their duties in reporting on the US bombing of MSF’s Kunduz hospital.