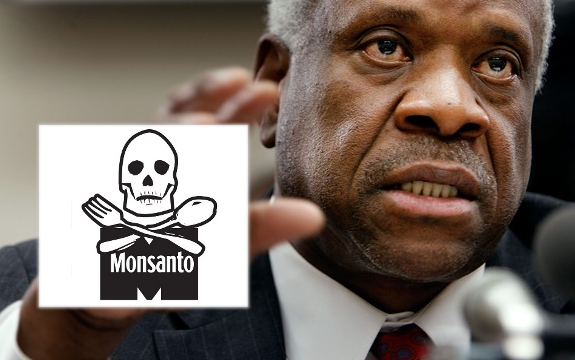 The person in the picture of this article is Clarence Thomas, a supreme court judge of the United States. Prior to holding this position, he was an assistant to State Attorney General John Danforth. When Danforth was elected into the U.S. Senate, Thomas became an attorney for Monsanto.

This isn’t the first time Monsanto has been sued, and it certainly won’t be the last. Last week, dozens of environmental activist groups, farmers, and sustainable food organizations joined forces at the COP21 Paris to announce that Monsanto will face international tribunal over crimes against humanity and the environment. Their trial is set to take place in October of 2016; more specifically, on World Food Day. At least that’s the plan, but the effort already seems to be receiving resistance from corporate media, as mentioned with the Forbes article linked below.

“The Steering Committee of the Monsanto Tribunal decided that the costs incurred in the organisation and running of the Tribunal should be financed by the citizens of the world and by civil society organizations. Indeed, the steering Committee believes that the defense of the safety of the planet and its inhabitants is the concern of all people! This is why it launched the largest crowdfunding platform ever to date.”  (source)

The announcement took place at the climate summit because Monsanto is a major contributor to anthropogenic greenhouse gas emissions, not to mention the depletion of soil and water resources, declining biodiversity, species extinction, and the displacement of  millions of small farmers worldwide.

“The Tribunal will rely on the ‘Guiding Principles on Business and Human Rights’ adopted at the UN in 2011. It will also assess potential criminal liability on the basis of the Rome Statute that created the International Criminal Court in The Hague in 2002, and it will consider whether a reform of international criminal law is warranted to include crimes against the environment, or ecocide, as a prosecutable criminal offense, so that natural persons could incur criminal liability.” (source)

The committee members as of now include: Vandana Shiva, Corinne Lepage, Marie-Monique Robin, Olivier de Schutter, Gilles-Eric Séralini, and Hans Herren. This is quite an impressive list; Dr. Seralini published a groundbreaking study last year in Environmental Sciences Europe showing severe liver and kidney damage as well as hormonal disturbances in rats fed with GM maize in conjunction with low levels of Roundup — levels which were even below those permitted in most drinking water across Europe. Results also indicated high rates of large tumors and mortality in most treatment groups.

This is the video taken from the tribunal, you can find out more from them here.

The crimes against humanity include a long list. Recently, the World Health Organization found that Glyphosate (main active ingredient in Monsanto’s roundup herbicide) can cause cancer. A recently study also found it to be 125 times more toxic than regulators had claimed. This is disturbing because glyphosate is found in the urine of humans all over the world.

It’s not only glyphosate that is a cause for concern, but also agent orange. The fact is that Monsanto’s chemicals are linked to birth defects, deadly kidney disease, cancer, and more. Keep in mind this does not even include the pesticides that are sprayed on non-organic food.

The list is long, and I encourage you to do your research if you are curious. There is no shortage of information out there when it comes to this subject.

I will leave you with this video taken of Dr. Vandana Shiva, it has a powerful ending.

**Keep in mind, Monsanto is to be put on trial! This story is developing, at a look at the committee members. Forbes reports that “Other fringe websites reported similar news of the so-called International Monsanto Tribune set to take place in the Hague, the seat of Dutch government, in October of next year. Thus far, no mainstream media has reported on the plan, because it’s not a real trial.”

Really Forbes? , you really believe nothing is true until a mainstream media source reports it?  Dr. Shiva would not be lying, neither would any of the other committee members as it is an impressive list.