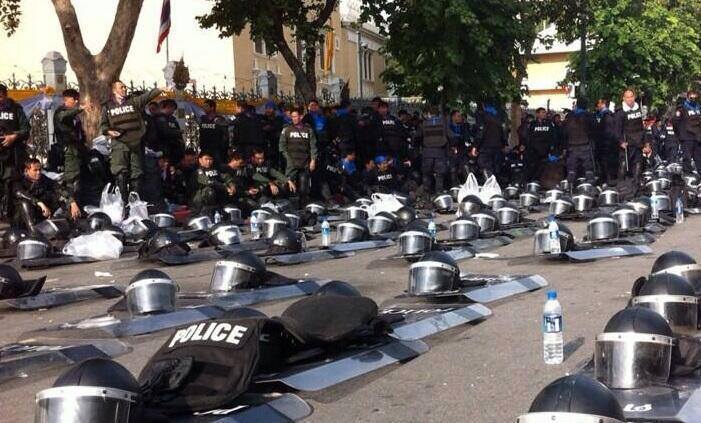 In Thailand, riot police laid down their helmets and shields, yielding to the peaceful protesters which they had been commanded to arrest.

In a showing of solidarity, police stood aside and allowed protesters to continue on.

Those who had rallied to protest explained that their goal was to confront and overcome the political apparatus of former Prime Minister Thaksin Shinawatra.Shinawatra is accused of widespread corruption and abuse of power, leaving him with few sympathizers among the police.

Thaksin’s sister, Prime Minister Yingluck Shinawatra, is in power now, but the people see her as nothing more than a mouth piece for her brother.

Suthep Thaugsuban is the leader of the protests that are sweeping Thailand. He told his supporters to storm the Bangkok Metropolitan Police Bureau and demand change.

In light of this move to take over the police building, in their plan to topple the Shinawatra government, the action of the police has surprised many.

With all of that said, this should not imply that the replacements the protestors have in mind are ideal. But the public statement of solidarity made by the police is inspiring nevertheless.

Watch the video embedded below and let us know if you think this could ever happen in places like the United States?