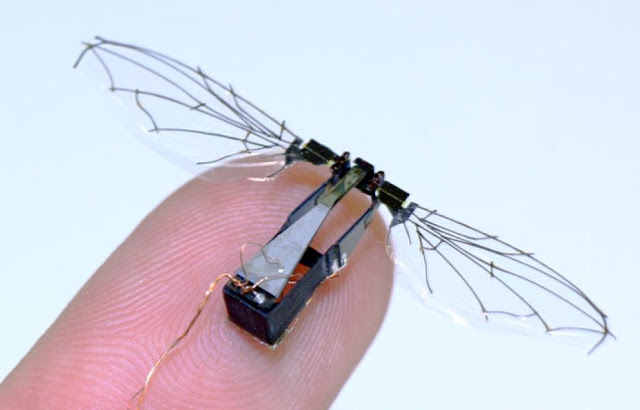 It has taken less than two years for a robotic insect called RoboBee to advance from making its first controlled flight to now being able to both fly and take a swim.

That first point – robotic pollinators led Greenpeace to issue the following video, rhetorically asking if this is the world we really want.

RoboBee indeed continues to make progress.  A new press release from Harvard University suggests that they are now close to a true “flying submarine.”

Looking once again to mimic nature, researchers studied the puffin, a bird which is quite an attraction in Iceland, famed for its high-speed flight and ability to dive and use a similar flight motion to move underwater.

Now, researchers at the Harvard Paulson School have demonstrated a flying, swimming, insectlike robot, easing the way to create future aerial-aquatic robotic vehicles. The research was presented recently in a paper at the International Conference on Intelligent Robots and Systems in Germany, where first author Chen accepted the award for best student paper.

The video can be viewed below. The RoboBee is less than the size of a paperclip and can flap its wings at 120 times per second. While many of the design elements have enabled it to successfully transition from air to water and not be damaged, researchers explain that they have yet to solve the problem of having RoboBee re-emerge from the water to air.

While this RoboBee can move seamlessly from air to water, it cannot yet transition from water to air because it can’t generate enough lift without snapping one of its wings. Solving that design challenge is the next phase of the research, according to Chen.

Researchers also note that the principle that they are developing on this tiny scale hold promise for larger bio-robots:

What is really exciting about this research is that our analysis of flapping-wing locomotion is not limited to insect-scaled vehicles,” said Chen. “From millimeter-scaled insects to meter-scaled fishes and birds, flapping locomotion spans a range of sizes. This strategy has the potential to be adapted to larger aerial-aquatic robotic designs.”

“Bio-inspired robots, such as the RoboBee, are invaluable tools for a host of interesting experiments — in this case on the fluid mechanics of flapping foils in different fluids,” said Wood. “This is all enabled by the ability to construct complex devices that faithfully re-create some of the features of organisms of interest.”