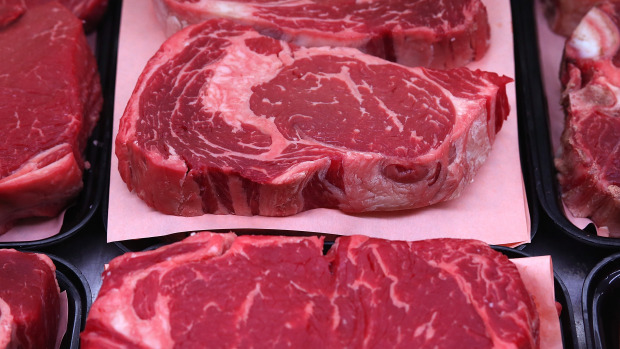 Going through the comments of some of my recent posts, I noticed the frequently stated notion that eating meat was an essential step in human evolution. While this notion may comfort the meat industry, it’s simply not true, scientifically.

Dr. T. Colin Campbell, professor emeritus at Cornell University and author of The China Study, explains that in fact, we only recently (historically speaking) began eating meat, and that the inclusion of meat in our diet came well after we became who we are today. He explains that “the birth of agriculture only started about 10,000 years ago at a time when it became considerably more convenient to herd animals. This is not nearly as long as the time [that] fashioned our basic biochemical functionality (at least tens of millions of years) and which functionality depends on the nutrient composition of plant-based foods.”

That jibes with what Physicians Committee for Responsible Medicine President Dr. Neal Barnard says in his book, The Power of Your Plate, in which he explains that “early humans had diets very much like other great apes, which is to say a largely plant-based diet, drawing on foods we can pick with our hands. Research suggests that meat-eating probably began by scavenging–eating the leftovers that carnivores had left behind. However, our bodies have never adapted to it. To this day, meat-eaters have a higher incidence of heart disease, cancer, diabetes, and other problems.”

There is no more authoritative source on anthropological issues than paleontologist Dr. Richard Leakey, who explains what anyone who has taken an introductory physiology course might have discerned intuitively–that humans are herbivores. Leakey notes that “[y]ou can’t tear flesh by hand, you can’t tear hide by hand…. We wouldn’t have been able to deal with food source that required those large canines” (although we have teeth that are called “canines,” they bear little resemblance to the canines of carnivores).

In fact, our hands are perfect for grabbing and picking fruits and vegetables. Similarly, like the intestines of other herbivores, ours are very long (carnivores have short intestines so they can quickly get rid of all that rotting flesh they eat). We don’t have sharp claws to seize and hold down prey. And most of us (hopefully) lack the instinct that would drive us to chase and then kill animals and devour their raw carcasses. Dr. Milton Mills builds on these points and offers dozens more in his essay, “A Comparative Anatomy of Eating.”

The point is this: Thousands of years ago when we were hunter-gatherers, we may have needed a bit of meat in our diets in times of scarcity, but we don’t need it now. Says Dr. William C. Roberts, editor of the American Journal of Cardiology, “Although we think we are, and we act as if we are, human beings are not natural carnivores. When we kill animals to eat them, they end up killing us, because their flesh, which contains cholesterol and saturated fat, was never intended for human beings, who are natural herbivores.”

Sure, most of us are “behavioral omnivores”–that is, we eat meat, so that defines us as omnivorous. But our evolution and physiology are herbivorous, and ample science proves that when we choose to eat meat, that causes problems, from decreased energy and a need for more sleep up to increased risk for obesity, diabetes, heart disease, and cancer.

Old habits die hard, and it’s convenient for people who like to eat meat to think that there is evidence to support their belief that eating meat is “natural” or the cause of our evolution. For many years, I too, clung to the idea that meat and dairy were good for me; I realize now that I was probably comforted to have justification for my continued attachment to the traditions I grew up with.

But in fact top nutritional and anthropological scientists from the most reputable institutions imaginable say categorically that humans are natural herbivores, and that we will be healthier today if we stick with our herbivorous roots. It may be inconvenient, but it alas, it is the truth.