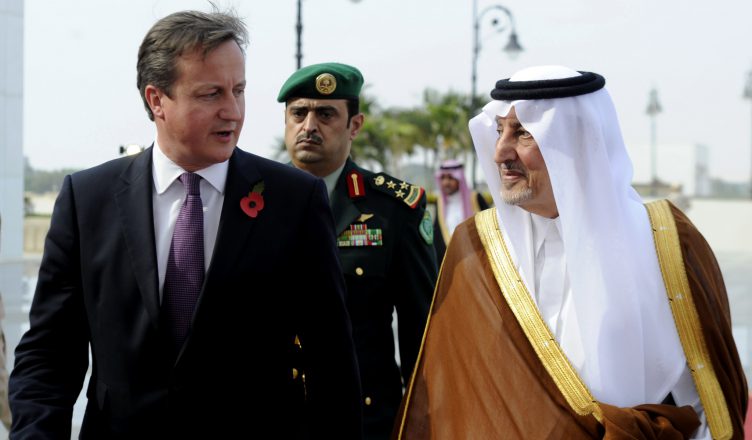 Britain conducted secret vote-trading deals with Saudi Arabia to ensure both states were elected to the UN human rights council (UNHRC), according to leaked diplomatic cables.

The elevation of the Saudi kingdom to one of the UN’s most influential bodies in 2013 prompted fresh international criticism of its human rights record.

This week, a new diplomatic row has erupted over a Shia activist, Ali Mohammed al-Nimr, who faces death by crucifixion after being convicted at the age of 17 of joining an anti-government demonstration.

Riyadh has sanctioned more than a hundred beheadings so far this year – more, it is claimed, than Islamic State.

The Saudi foreign ministry files, passed to Wikileaks in June, refer to talks with British diplomats ahead of the November 2013 vote in New York. The documents have now been been translated by the organisation UN Watch – a Geneva-based non-governmental human rights organisation that scrutinises the world body – and newspaper the Australian.

The classified exchanges, the paper said, suggest that the UK initiated the secret negotiations by asking Saudi Arabia for its support. Both countries were eventually elected to the UNHRC, which has 47 member states.

The Saudi cables, dated January and February 2013, were translated separately by the Australian and UN Watch. One read: “The delegation is honoured to send to the ministry the enclosed memorandum, which the delegation has received from the permanent mission of the United Kingdom asking it for the support and backing of the candidacy of their country to the membership of the human rights council (HRC) for the period 2014-2016, in the elections that will take place in 2013 in the city of New York.

Another cable revealed that Saudi Arabia transferred $100,000 for “expenditures resulting from the campaign to nominate the Kingdom for membership of the human rights council for the period 2014-2016”. It was unclear where or how this money was spent.

Hillel Neuer, executive director of UN Watch, told the Australian: “Based on the evidence, we remain deeply concerned that the UK may have contracted to elect the world’s most misogynistic regime as a world judge of human rights.

“UN Watch finds it troubling that the UK refuses to deny the London-Riyadh vote-trade as contemplated in the Saudi cable, nor even to reassure the public that their voting complies with the core reform of the UNHRC’s founding resolution, which provides that candidates be chosen based on their human rights record, and that members be those who uphold the highest standards of human rights.”

A Foreign and Commonwealth Office spokeswoman said: “As is standard practice with all members, we never reveal our voting intentions or the way we vote.

“The British government strongly promotes human rights around the world and we raise our human rights concerns with the Saudi Arabian authorities.

“We regularly make our views known, including through the UN universal periodic review process and the Foreign and Commonwealth Office’s annual human rights and democracy report.”

The revelation follows Saudi Arabia’s appointment this week as chair of a UNHRC panel that selects senior officials who draft international human rights standards and write reports on violations.

Amnesty International UK’s head of policy and government affairs Allan Hogarth said: “If the UK is doing back-room deals with Saudi officials over human rights, this would be a slap in the face for those beleaguered Saudi activists who already struggle with endemic persecution in the kingdom.

“People like the blogger Raif Badawi, who is still behind bars, have paid a heavy price for speaking about democracy and the need for tolerance in Saudi Arabia, and now the young activist Mohammed al-Nimr is also facing execution.

“The UK should be supporting the rights of Badawi and Al-Nimr, not pushing the non-existing human rights credentials of the Saudi Arabian authorities.”

“The government needs to come clean about why it is refusing to stop a Ministry of Justice bid that would make us complicit in the worst abuses of the Saudi ‘justice’ system. Instead of cosying up to this repressive government at every opportunity, the UK must urgently withdraw the MoJ bid, and use our obvious influence to halt Ali’s execution.”