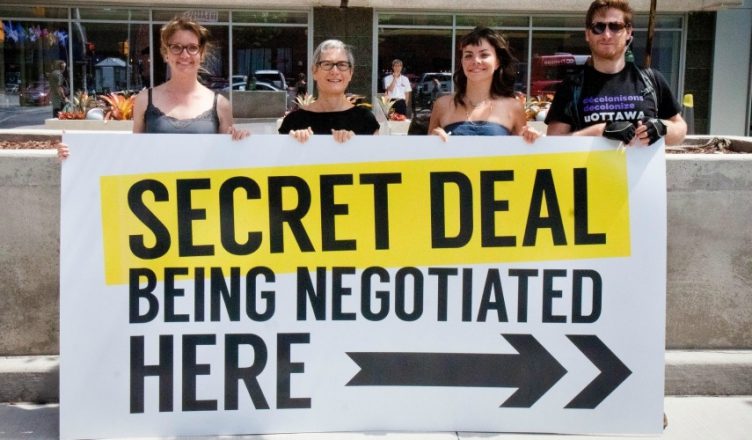 After being shrouded in secrecy for years, the full contents of the 12-nation Trans Pacific Partnership (TPP) will soon be brought into the sunlight.

According to Kevin Collier at Daily Dot, U.S. Trade Representative Michael Froman has said the text will be made available to the public at large in approximately 30 days—on or around November 7.

“[We] look forward to having it released as soon as possible,” Froman said in a press call Wednesday that was embargoed until Thursday morning. “We’re shooting to do it within the 30 days following the completion of the negotiations.”

Under the terms of the Fast Track legislation passed earlier this year, lawmakers will not be able to amend or filibuster the pro-corporate “trade” deal that was completed this week.

President Barack Obama must wait at least 90 days after formally notifying Congress of the deal before he can sign it and send it to Capitol Hill, and the full text of the agreement must be made public for at least 60 of those days. Congress gets to spend the first 30 days of that time privately reviewing the documents and consulting with the administration.

As Kelsey Snell wrote for the Washington Post, that 60-day public comment window “will provide critical insight into how much popular support the deal may receive. A poor reception during the public phase could make it difficult for Obama to rally support when it comes time for Congress to vote.”

The next step will be for the U.S. International Trade Commission to conduct a full economic review of the deal. The agency has up to 105 days to complete that work but the process could take much less time.

Once the implementing bill is introduced in the House and the Senate, Congress has a maximum of 90 days to approve or disapprove the trade deal but can move much more quickly.

However, Public Citizen’s Lori Wallach has pointed out (pdf) that 2016 election politics may imperil the deal. “The intense national battle over trade authority was just a preview of the massive opposition the TPP will face given that Democratic and GOP members of Congress and the public soon will be able to see the specific TPP terms that threaten their interests,” she said (pdf) on Monday.