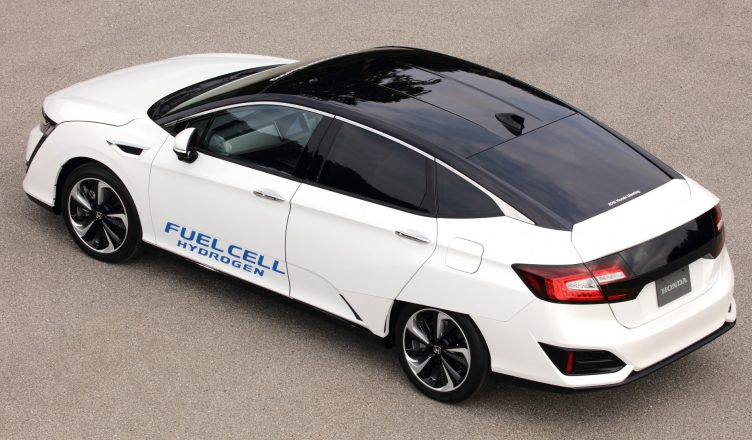 TOKYO — The most notable thing about Honda Motor new hydrogen-powered FCV, to be unveiled Wednesday at the Tokyo Motor Show, is not the silent burst of acceleration it provides when your foot touches the pedal, or the fact that it emits nothing but water vapor from the tailpipe. It’s not even that the FCV can go more than 400 miles between three-minute hydrogen fillings – assuming you have access to a hydrogen station.

No, the most important thing is that Honda’s new fuel cell system is one-tenth the cost of previous versions and — for the first time — fits neatly under the car’s hood, taking up no more space than a typical V-6 engine. That means two things: 1) there’s more space for passengers and cargo, and 2) the compact fuel cell power train can be used in a variety of other Honda vehicles.

This really does feel like a real leap forward in the shift toward fuel cell vehicles and a so-called “hydrogen society.”

Of course, getting the hydrogen remains a sticking point. In California and the Northeast, companies like First Element and Air Liquide are installing hydrogen stations with support from government grants as well as loans from Toyota and Honda, but the rollout to date has been slow.

Honda might have a solution, though: it’s developing a compact Smart Hydrogen Station, enabling you to use high-pressure electrolysis to produce your own hydrogen at home. There’s no word on when that might be available, but if it’s affordable, it could be a huge breakthrough in speeding the adoption of fuel cell vehicles.

“Compared to 10 years ago, I think fuel cell vehicles have developed significantly in terms of the technology,” said Takahiro Hachigo, who took over as Honda’s president and chief executive in June. “Ten years ago, we said fuel cells could not be driven in cold weather, for example, and that the hardware was too heavy. Today – fuel cells are equal to gasoline engine cars.” The next step, he said, is figuring out how to mass produce them affordably. Honda is partnering with General Motors GM -2.94% to develop next-generation fuel cell systems and lower-cost hydrogen storage tanks.
Recommended by Forbes

More details about Honda FCV — including its real name — will likely be disclosed at Wednesday’s press conference, but Honda gave journalists a preview of the car at an advanced technology presentation at its Research and Development Center outside Tokyo.

Despite its compact size, the new fuel cell system gets a 30 percent increase in power, to 130 kilowatts, with a 700-kilometer (435 mile) range. It’s paired with a flat lithium-ion battery pack that fits under the front seats. There are two hydrogen tanks: a large one that fits behind the rear bulkhead, with a smaller one under the rear seat. The larger tank clearly cuts into trunk space, but there’s still a decent amount of room for golf bags or luggage.

Virtually every automaker is working on fuel cell vehicles; it’ll be interesting to see how they develop. Just as with hybrid vehicles a generation ago, it’s Honda and Toyota leading the way.