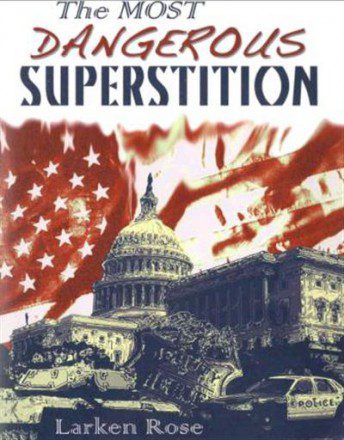 When someone looks out at the world and sees all manner of suffering and injustice, stretching back for thousands of years and continuing today, he invariably blames such problems on someone else’s hatred, greed, or stupidity. Rarely will someone consider the possibility that his own belief system is the cause of the pain and suffering he sees around him.

But in most cases, it is.

The root cause of most of society’s ills–the main source of man’s inhumanity to man–is neither malice nor negligence, but a mere superstition–an unquestioned assumption which has been accepted on faith by nearly everyone, of all ages, races, religions, education and income levels. If people were to recognize that one belief for what it is–an utterly irrational, self-contradictory, and horribly destructive myth–most of the violence, oppression and injustice in the world would cease. But that will happen only when people dare to honestly and objectively re-examine their belief systems.

“The Most Dangerous Superstition” exposes the myth for what it is, showing how nearly everyone, as a result of one particular unquestioned assumption, is directly contributing to violence and oppression without even realizing it. If you imagine yourself to be a compassionate, peace-loving, civilized human being, you must read this book.

Read online as PDF: The Most Dangerous Superstition by Larken Rose

Another online as PDF: The Most Dangerous Superstition by Larken Rose

City of the Dawn

Economic Calculation in a Natural Law / Resource Based Economy

The Most Dangerous Superstition by Larken Rose