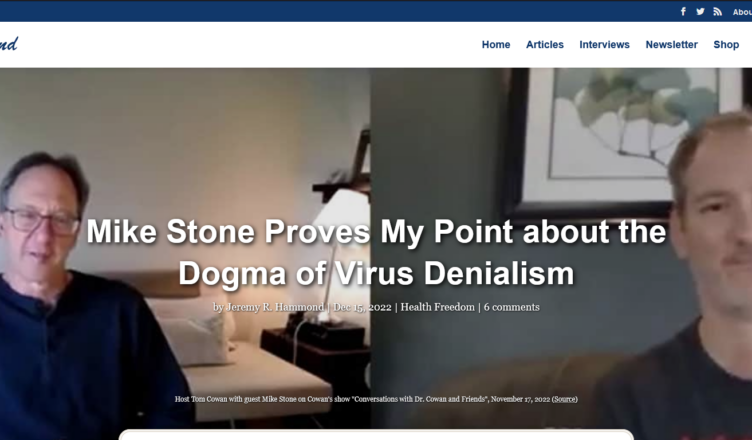 I wrote this comment today in a recent article about Mike Stone by the independent journalist Jeremy Hammond titled “Mike Stone Proves My Point about the Dogma of Virus Denialism” for the sake of his followers since I feel that there are clear errors in his thinking and way of arguing that needs to be highlighted. I think it shows the absurdity of “virology” but also the leap of faith that both “virologists” and Hammond take without realizing it.

My comment: “We can’t conduct scientific experiments with unicorns or fairies unless we have found them in nature first, same with alleged “viruses”. You try to argue about purification in various ways but fail to see the problem with your arguments. If we take a sample and choose to filter it and purify it then it doesn’t automatically mean there is a “virus” in the filtered and purified sample, we have to verify it BEFORE we do any scientific experiments. Otherwise we are working under an unproven assumption that there is an alleged ”virus” in the sample where the result becomes meaningless.

Instead you just like the “virologists” just ASSUME that “viruses” are in the samples after filtering and purification without ever confirming it. Instead what is happening is that the “virologists” refer to a result of a pseudoscientific experiment as “evidence” of its existence which is like referring to Christmas presents under the tree as “evidence” of Santa Claus. Effects do not prove causes much less the existence of a specific thing.

To understand these things better we need to approach this topic under the perspective that we are attempting to find an alleged “virus” for the first time ever. How would we start? First of, we would need to find it directly in nature as in finding it directly from the fluids of a sick host BEFORE we attempt to do any scientific experiments with it. If we can’t find it then we can’t experiment with it much less claim its existence and requirements just like we can’t claim that unicorns require rainbows in order to survive. We need to find the thing first directly in nature, then we can attempt to figure out the properties and requirements.

Logic and common sense tells us that we can’t conduct an experiment with things we haven’t shown to exist PRIOR to an experiment taking place. I mean how do we manipulate a thing that we have no direct evidence of existing? It’s like claiming to do experiments with unicorns and see if they cause damage to people’s backyards without ever finding one in nature before doing the experiment. The FOIA requests that have asked for the direct evidence for its claimed existence BEFORE an experiment have taken place, they all returned with no results. With these things in mind this means that there is no scientific evidence of alleged “viruses”.

Yes, what the FOIA requests are asking goes against how the “virologists” work which tells us everything we need to know. They do pseudoscientific work under the false pretense that it is scientific and work under unproven assumptions where they deceive themselves, misinterpret the results and in turn deceive the rest of the people despite their good intentions.”