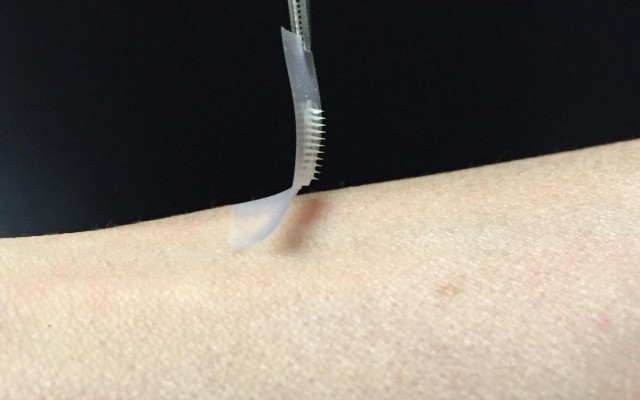 A new “smart” insulin patch could do away with painful injections and revolutionize the way diabetics keep their blood sugar levels in check.

For people affected by diabetes, monitoring and regulating insulin levels can be a tedious and dangerous task.

I remember my own grandmother, a type II diabetic, would have a sugary snack on her at all times in case her blood sugar levels suddenly dropped, which caused her to get sick or faint. Always coy or perhaps even slightly embarrassed, she would make me turn away whenever she had to inject.

At the time I didn’t fully understand, but looking back now I see how her quality of life was compromised by one of today’s most shockingly prevalent diseases.

Thus, when I read about this latest innovation I was blown away.

The patch, created by researchers from the University of North Carolina and NC State, is a thin square covered with more than 100 tiny needles. According to researchers, the patch works fast, is simple to use, and is made from biocompatible materials, IFLscience reports.

The patch’s tiny, painless needles are packed with insulin and glucose-sensing enzymes in microscopic storage units. The patch is able to release these enzymes when blood sugar levels get too high.

The study, published in Proceedings of the National Academy of Sciences, showed promising results in a mouse model of type 1 diabetes. Researchers hope to see similar success in subsequent clinical trials in humans.

“The whole system can be personalized to account for a diabetic’s weight and sensitivity to insulin,” said co-senior author Zhen Gu in a statement, “so we could make the smart patch even smarter.”

The study found that the patch lowered blood glucose in mice for up to nine hours. As mice are less sensitive to insulin than humans, researchers suggest the patch can have a longer-lasting effect in diabetic patients.

“We constructed artificial vesicles to perform these same functions by using two materials that could easily be found in nature,” said first author Jiching Yu.

These substances were hyaluronic acid and 2-nitroimidazole (NI), which the researchers joined up to create a new molecule where one end was water-loving and the other was water-fearing. These molecules self-assembled into a vesicle within which researchers inserted a core of solid insulin and enzymes, which are specially designed to sense glucose.

When blood sugar levels increased, the enzymes converted the excess glucose molecules that crowded into the vesicles into a product called gluconic acid, a reaction that requires the consumption of oxygen.

This means that the environment becomes starved of oxygen, which makes the water-loving NI molecules become water-fearing. Ultimately, this causes the vesicles to fall apart, sending insulin into the bloodstream.

“The hard part of diabetes care is not the insulin shots, or the blood sugar checks, or the diet but the fact that you have to do them all several times a day every day for the rest of your life,” said co-senior author John Buse. “If we can get these patches to work in people, it will be a game changer.“