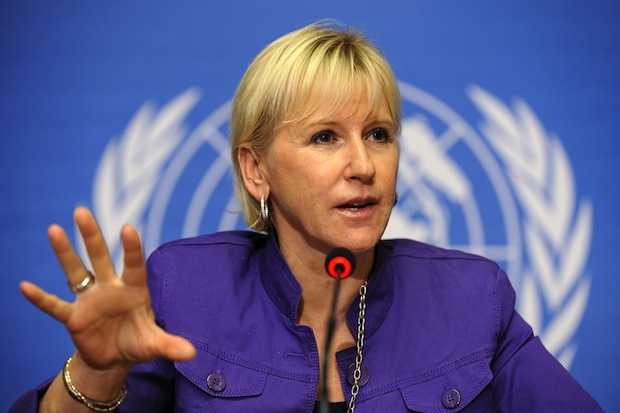 A few weeks ago Margot Wallström, the Swedish foreign minister, denounced the subjugation of women in Saudi Arabia. As the theocratic kingdom prevents women from travelling, conducting official business or marrying without the permission of male guardians, and as girls can be forced into child marriages where they are effectively raped by old men, she was telling no more than the truth. Wallström went on to condemn the Saudi courts for ordering that Raif Badawi receive ten years in prison and 1,000 lashes for setting up a website that championed secularism and free speech. These were ‘mediaeval methods’, she said, and a ‘cruel attempt to silence modern forms of expression’. And once again, who can argue with that?

The backlash followed the pattern set by Rushdie, the Danish cartoons and Hebdo. Saudi Arabia withdrew its ambassador and stopped issuing visas to Swedish businessmen. The United Arab Emirates joined it. The Organisation of Islamic Co-operation, which represents 56 Muslim-majority states, accused Sweden of failing to respect the world’s ‘rich and varied ethical standards’ — standards so rich and varied, apparently, they include the flogging of bloggers and encouragement of paedophiles. Meanwhile, the Gulf Co-operation Council condemned her ‘unaccept-able interference in the internal affairs of the Kingdom of Saudi Arabia’, and I wouldn’t bet against anti-Swedish riots following soon.
Yet there is no ‘Wallström affair’. Outside Sweden, the western media has barely covered the story, and Sweden’s EU allies have shown no inclination whatsoever to support her. A small Scandinavian nation faces sanctions, accusations of Islamophobia and maybe worse to come, and everyone stays silent. As so often, the scandal is that there isn’t a scandal.
It is a sign of how upside-down modern politics has become that one assumes that a politician who defends freedom of speech and women’s rights in the Arab world must be some kind of muscular liberal, or neocon, or perhaps a supporter of one of Scandinavia’s new populist right-wing parties whose commitment to human rights is merely a cover for anti-Muslim hatred. But Margot Wallström is that modern rarity: a left-wing politician who goes where her principles take her. She is foreign minister in Sweden’s weak coalition of Social Democrats and Greens, and took office promising a feminist foreign policy. She recognised Palestine in October last year — and, no, the Arab League and Organisation of Islamic Co-operation and Gulf Co-operation Council did not condemn her ‘unacceptable interference in the internal affairs of Israel’. I confess that her gesture struck me as counterproductive at the time. But after Benjamin Netanyahu ruled out a Palestinian state as he used every dirty trick he could think of to secure his re-election, she can claim with justice that history has vindicated her.
She moved on to the Saudi version of sharia law. Her criticism was not just rhetorical. She said that it was unethical for Sweden to continue with its military co-operation agreement with Saudi Arabia. In other words, she threatened Swedish arms companies’ ability to make money. Saudi Arabia’s denial of business visas to Swedes threatened to hurt other companies’ profits too. You might think of Swedes as upright social democrats, who have never let worries of appearing tedious stand in the way of their righteousness. But that has never been wholly true, and is certainly not true when there is money at stake.
Sweden is the world’s 12th largest arms exporter — quite an achievement for a country of just nine million people. Its exports to Saudi Arabia total $1.3 billion. Business leaders and civil servants are also aware that other Muslim-majority countries may follow Saudi Arabia’s lead. During the ‘cartoon crisis’ — a phrase I still can’t write without snorting with incredulity — Danish companies faced global attacks and the French supermarket chain Carrefour took Danish goods off the shelves to appease Muslim customers. A co-ordinated campaign by Muslim nations against Sweden is not a fanciful notion. There is talk that Sweden may lose its chance to gain a seat on the UN Security Council in 2017 because of Wallström.
To put it as mildly as I can, the Swedish establishment has gone wild. Thirty chief executives signed a letter saying that breaking the arms trade agreement ‘would jeopardise Sweden’s reputation as a trade and co-operation partner’. No less a figure than His Majesty King Carl XVI Gustaf himself hauled Wallström in at the weekend to tell her that he wanted a compromise. Saudi Arabia has successfully turned criticism of its brutal version of Islam into an attack on all Muslims, regardless of whether they are Wahhabis or not, and Wallström and her colleagues are clearly unnerved by accusations of Islamophobia. The signs are that she will fold under the pressure, particularly when the rest of liberal Europe shows no interest in supporting her.
Sins of omission are as telling as sins of commission. The Wallström non-affair tells us three things. It is easier to instruct small countries such as Sweden and Israel on what they can and cannot do than America, China or a Saudi Arabia that can call on global Muslim support when criticised. Second, a Europe that is getting older and poorer is starting to find that moral stands in foreign policy are luxuries it can no longer afford. Saudi Arabia has been confident throughout that Sweden needs its money more than it needs Swedish imports.
Finally, and most revealingly in my opinion, the non-affair shows us that the rights of women always come last. To be sure, there are Twitter storms about sexist men and media feeding frenzies whenever a public figure uses ‘inappropriate language’. But when a politician tries to campaign for the rights of women suffering under a brutally misogynistic clerical culture she isn’t cheered on but met with an embarrassed and hugely revealing silence.”