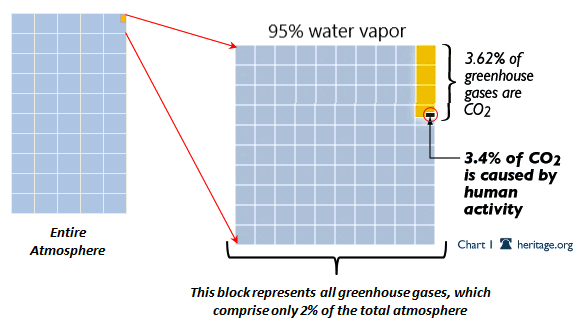 Total amount of “greenhouse” gases in the atmosphere: 2%

Water vapor: 95% of the total amount of “greenhouse” gases

The highest quality of temperature data are from the US Explosion of life: 540 million years ago Was warmer during the medieval warm period compared to now No acceleration in sea level rise since the 1850. Forest fires in the US has decreased the past 100 years The number of hurricanes in US has declined since the 1850 Ocean alkalinity fluctuate but it always remain alkaline regardless of levels of CO2 because of the presence of basalt. As pointed out earlier, the biggest explosion of life happened 540 million years ago and that was when CO2 levels was almost 20x higher than today. Some of the variables on earth regarding climate change Some of the cycles regarding climate change Summary: CO2 and temperature do not correlate meaning that CO2 do not drive temperature and there are a number of variables and cycles to consider which are being ignored. The current climate change hysteria is unfounded, unjustified and based on a scientific and political fraud that is using extremely simplistic terms to describe an extremely complex system.

Click here to find more information about the topic of climate change.